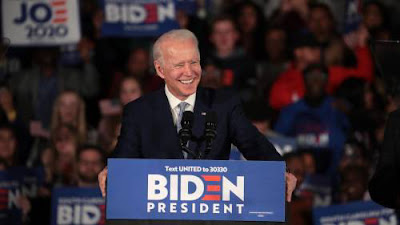 Joe Biden, the Democratic presidential Candidate in the United State of America, secured the White House race to be America’s 46th President.
He captured the frontline state of Pennsylvania.
Read More: Man Drag Davido, Falz, Aisha Yesufu and 50 other celebrities to Court for promoting #EndSars Protest.
In the toughest race in American electoral history Biden had been neck-to-neck with President Donald Trump.
Biden chose distant social distant campaign to order to avoid the spread of the coronavirus, which was the subject of his race.
Trump was criticised for holding rallies that he described as “mega spreader” events in violation of any guideline on the protection of Coronavirus.
Read More: Billionaire Femi Otedola has asked his daughter Temi when she would get married to her boyfriend Mr Eazi
In addition to his running mate Kamala Harris, Biden will lead a rather divided America.
Harris made history as the United States’ first female vice-president.